Fiji was one of the first colonies to employ the new King George V key plate of the Imperium design in February 1912, and solely employed this design for its definitive issue throughout the King George V period. This was the only colony that required additional ornamentation within the colony name tablet, although it may be argued that the effect was to clutter this area rather than enhance the design. Sheets were not numbered until c. 1920.

The 1/- Specimen on watermark Multiple Crown CA paper is stated by Samuel to exist on green and new green paper, but only the Specimen distribution for the first printing in 1912 are recorded in the Day Books.

The ½d exists with watermark inverted and reversed, and the 3d purple on yellow from plate 5 with watermark sideways, both on Multiple Crown CA paper.

The Colonial Journal of April 1914 reported that the first printing of the 3d, 4d, 5d and 6d (Reqn.l14/13) were printed in single fugitive inks.

The Catalogue of the Royal Collection records the 3d and 4d from plate 1 on both yellow and lemon papers. Since this was the only plate 1 printing of these two values, both shades of paper must have been used for each.

Part of all three printings of the ½d from plate 5 were subsequently locally overprinted WAR STAMP. A top left comer block from plate 5 in the blue-green shade has been seen that has the nick at 10 o'clock on the outer rim of the plate number circle (see chapter 9). Two more blocks from the same position, in blue-green and yellow-green, have also been seen without this damage. Since the damage is not known prior to November 1916 these must be the November 1915 and October 1916 printings, although the order of printing of these two shades is not known. The August 1918 printing must therefore be on the blue-green paper. The October 1916 printing was one of the last made from plate 5 before the plate number circle became damaged. 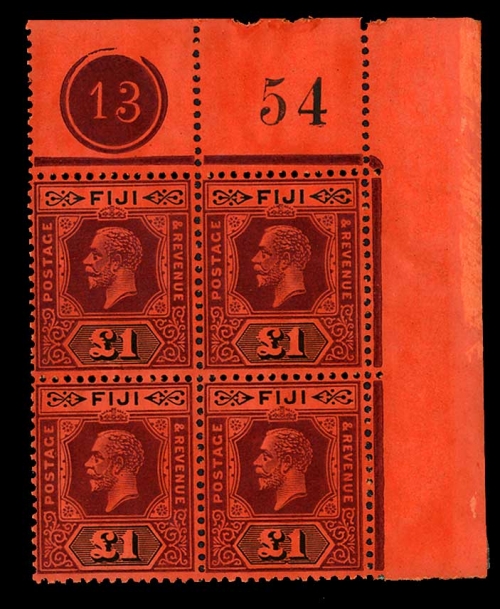 The 1d WAR STAMP with the overprint misplaced to the left by one column (resulting in the overprint falling in the margin on the left side of the sheet) was overprinted on a sheet from key plate 5. Both top and bottom interpanneau rows from the only known sheet still exist, the top row being in the Royal Collection.

A copy of the first 4d printing from plate 8 (for Reqn. 129/9 in March 1920) has been seen on buff paper. It has not been verified whether the orange-buff paper listed in the catalogue actually exists. Only 86 sheets were printed and this value is relatively scarce. The second plate 8 printing was on pale yellow paper, one of the first to be made on this new batch of paper.

When the printing for the 1/- plate 11 for Reqn. 1674 was entered in the Plate Issue Register it was first entered as '1d' and corrected to read 'Is'. A plate block of the 1/- plate 11 was duly supplied to the King. The correction was not clearly made however, and retained the appearance of '1d' (Fig. 16-3). When the next requisition (Reqn. 1884) was printed, the decision on what to send the King appears to have been based on this erroneous entry. A further block of the 1/- plate 11 was sent, but not the 1d. The Royal Collection thus lacks a 1d plate 11.

The King was not supplied with a plate 11 block of the 5d from Reqn.2080 and the Plate Issue Register does not record 'HM4'.

The only printing of the 3d blue from plate 11 exists in two distinct shades: bright blue and pale blue.

The plate block from the 1d plate 13 printing in the De La Rue Stamp Album had a sheet number '3086', although only 3,050 sheets were invoiced for this requisition.

The printing of 6,767 sheets of the 2d for Reqn.2713 was completed in two instalments. The Plate Issue Register shows that the first part was printed from plate 16 between 14th and 19th November 1928. The second part was printed just over a month later, between the 24th and 28th December. By this time plate 16 had been retired and replaced by plate 21, and the balance was printed from this plate. This was the first use of the new plate 21.

Since the combined printings were invoiced in one instalment it is not possible to state the precise division of quantities between the two plates. The quantities stated in the printings list have therefore been apportioned against each plate in the ratio 5:4 relating to the duration in days for each printing quoted in the Plate Issue Register, i.e. 3,767 sheets for the first and 3,000 for the second.

All values for Reqn. 2476 were printed in December 1927 from plate 16, with the exception of the 2d and 1/- values, for which plate 18 was employed. It was rare for two different keyplates to be used for the printing of the same requisition and it must be assumed that pressure to complete the order was responsible. This was the first occasion plate 18 was used and at this time it still had lower plate numbers, later removed from the plate.

The Stanley Gibbons catalogue lists the paper shade of the 4d of 1927 (SG 235a) as 'orange-buff, but there is no known make of watermark Multiple Script CA paper of this shade. Examples from plates 16 and 21 have been seen that appear to be this shade, but on the plate 16 copy the gum had not been spread to the edge of the sheet, leaving an ungummed portion in the standard pale yellow shade. It is believed this shade is produced from toning of the gum, and this catalogue listing is considered suspect.

The 2d value omitted variety exists within a block of nine in which the centre stamp contains the variety. Three other stamps in the block have varying parts of the duty plate design missing. The error is a freak and is almost certainly due to a temporary obstruction between plate and paper during printing from the duty plate.

The 3d and 6d from plate 26 are not in the Royal Collection.

The 60 leads for the 2d, 2½d, 3d, 4d, 5d and 6d, struck between February and May (no year date on the die proof), were presumably for increasing the plates, but there is no record of their being invoiced and hence they must originate after 1911, probably 1913. New values added during the King George V period, the ¼d and 2/6 in 1915, and the 1½d and 2/- in 1927, were made as 120-set plates. However, both the Plate Issue and Die and Plate Registers record all duty plates as 120-set. The 5/- is unaccounted for by a die proof after the first making, but it is recorded as 120-set in the Plate Issue Register by 1923 and was probably also increased early in the reign.

The Before and After Striking proofs for the ½d in December 1920, together with the file die proof marked '120 leads', indicate the making of a new 120-set duty plate for this value. The new plate had a marginal rule, producing double jubilee lines on the printed sheet, and was first used for the printing from plate 10 in 1922.

A new colony name die was employed for the new 1½d and 2/- duty plates in 1927. The pointed ends of the ornamentation on either side of 'FIJI' are noticeably closer to 'FIJI' on the new die. Also, the horizontal bars on the 'F' are longer than on the original die. 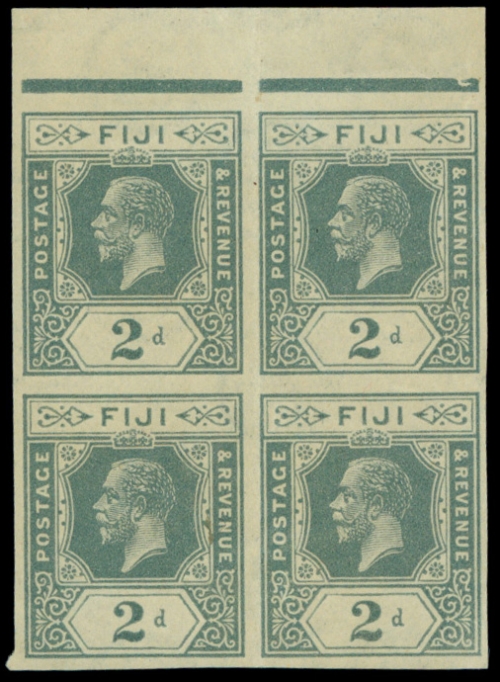 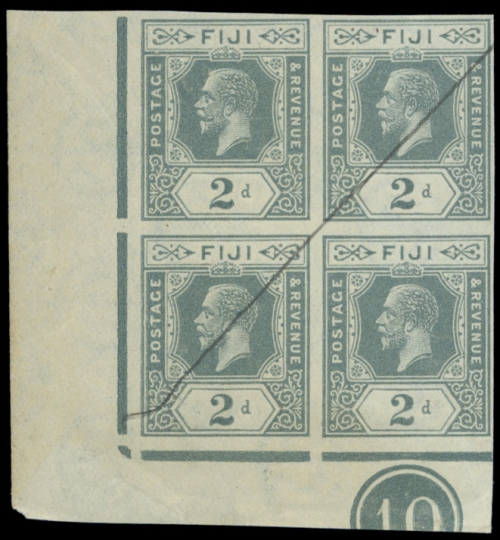