Printing companies that had contracts with the Crown Agents were required to produce a color proof for approval before a stamp with a new face value or design could be printed. The preparation of proofs was to follow specifications and guidelines set by the Crown Agents. When a request for color proofs was made, the Crown Agents issued the corresponding printing plates from their secu­rity storage room at the printing plant. The printers then prepared small quantities of ink and recorded the ink formulations in a ledger. If the ink colors were approved, the printers would thus have on record the proper formulations and could use them again when subsequent printings of the same value were required.

In the case of Bermuda’s King George V high-value issue, the only color proof found in the Crown Agents, Philatelic and Security Printing Archive is that for the first printing of the 12s6d ‘postage / revenue’ stamp in 1932. If similar proofs were also prepared for the first printings of all the other denominations (including the 12s6d ‘revenue / revenue’ stamp), they do not appear to have survived.

In correspondence with the author, Marcus Faux indicated that, as the 1917 printings were produced under wartime conditions, the Crown Agents were seriously understaffed, with two-thirds of their male employees having been called up. The employee left to oversee that proofs were made and properly recorded was so overworked that he placed all color proofs away in a cupboard, to be dealt with later. When these color proofs were eventually found after the war, it was decided that they should be destroyed. It seems likely that the color proofs for the 1917 printings of Bermuda’s 2s6d, 5s, 10s, and ?1 stamps were among them.

In the case of the 1920 order for 2s and 4s values, which were urgently required by the Bermuda government, De La Rue suggested that the colors follow the Universal Colour Scheme (see Chap­ter 3). As color proofs of Nyasaland’s King Edward VII 4s stamp and Malta’s King George V 2s stamp already existed, it seems likely that these were used to guide the printers in selecting the proper inks for the Bermuda stamps.

The surviving color proof of the 12s6d ‘postage / revenue’ stamp was one of three imperforate proofs submitted to the Crown Agents on 9 July 1932 and approved the same day Of the three, two were kept by Crown Agents, while the other one (Figure 1-18) was returned to De La Rue, where it received a ‘specimen’ perforation. Of the two color proofs retained by the Crown Agents, one was stuck down onto an Appendix Sheet with the typed inscription ‘Requisition 1623’ at the top and another inscrip­tion, in ink, reading ‘Appd for Colour [initials] 9/7/32’.

The second color proof of Bermuda’s 12s6d ‘postage / revenue’ stamp kept by the Crown Agents does not appear to have survived. In the Crown Agents, Philatelic and Security Printing Archive is a red album, entitled “Colonial Stamps” (volume SA3), in which are found a number of imperforate stamps of Bermuda, with the following annotations: the 2s (Requisition 1509/31), the 2s6d (Requisition 1227/28), the 10s (Requisition 1176/28), and the ?1 (Requisition 1090/27). The colors of the head and frame inks on these proofs are both lighter and paler than the stamps of the printings they represented (2s, July 1931; 2s6d, November 1928; 10s, May 1928; and ?1, April 1927). The likely explanation for these differences is that the coating on the paper used to print the proofs differed from that used in printing the actual stamps. Interestingly, although the April 1927 printing of the ?1 value took place a few days after the April 1927 printing of the 2s value, no proof of the latter denomination was made until July 1931. These are not original color proofs, as they are not of the first printings of the four values concerned. It seems likely that they were made for the Crown Agents’ reference collection, which lacked color proofs for those values. The absence of proofs for the 4s and 5s values is probably explained by the fact that these were not reprinted after 1921 (1920, in the case of the 4s) and that reference examples were therefore no longer needed in 1927. 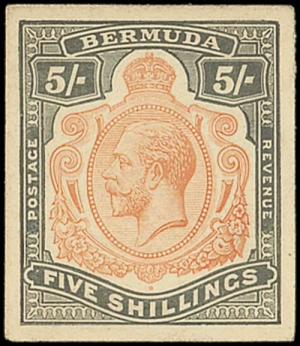 Trial Color Proof of the King George V Five Shillings stamp of Bermuda.
In vermilion and black, stamp-size on thin brownish card. Believed to be the only known example.
Sold at Spink Auction in 2010 for ?1800 plus buyer's premium